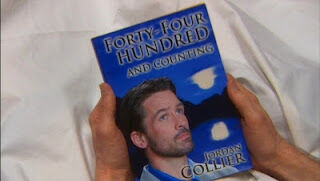 "Forty-Four Hundred and Counting" is an autobiographical book about the 4400 written by Jordan Collier.

Before the existence of promicin was known to anyone outside NTAC, Collier advertised that he could give ordinary people abilities through things such as his Key program. The book also exploits this philosophy. There is a chapter ripping celebrity culture. It also contains classified information obtained illegally by Agent Hubbard of NTAC. The book is very notable for revealing to the public that the 4400 were taken and returned by future humans.

Reverend Josiah criticized a shopkeeper for carrying the book in Wake-Up Call.

Retrieved from "https://4400.fandom.com/wiki/4400_and_Counting?oldid=8279"
Community content is available under CC-BY-SA unless otherwise noted.